Janny and Don were married on October 21, 1989 in Florida on a beach on a key just down the lane from Stephen King's recently purchased new home. More than a marriage, the occasion was a true collaboration. At 11pm that evening we were off to the British Virgin Islands for a honeymoon aboard the Flying Cloud, a sailing ship in the Windjammer Cruise armada. This was just after hurricane Hugo "played" with the tropics for a number of days.

Our first week was spent relaxing, sail boarding, snorkeling, eating and drinking to excess and relaxing in the tropical sun. When the captain discovered we were artists, he employed us during the second of our two week cruise to repaint the end of the ship's rum barrel. Our coin was free bar drinks and clothing items from the ship's gift shop.

In the photo above on the right, the old painting at one end is just visible. It was done by a former ship's captain and was a copy of a painting by A. D. Blake, a New Zealand marine artist (see photo below), whose work was exhibited in the Pusser's Rum Gift shop on Tortola. 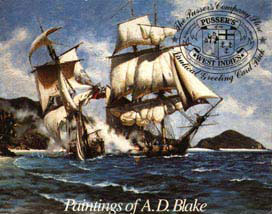 The painting on the barrel was a somewhat crude representation of the original work that had suffered from exposure to sea, salt , and sun. We purchased the gift boxed set of artist's greeting cards to have reference to do the work. The problem we encountered was to find artist supplies in the islands to do the job. We were taken to a paint store - the kind of establishment where you get paint to do your house. We had the greeting card box and we used it to select probable colors from among the array of plastic squeeze bottles containing some kind of acrylic/latex brew that came in colors such as barn red, sky blue, and brown. The available brushes left a lot to be desired and thank goodness there was a sable brush among the gear we brought along or the painting would have truly suffered. For the better part of a week we alternated around the barrel bartering for who would get do the water and who would paint the sails. 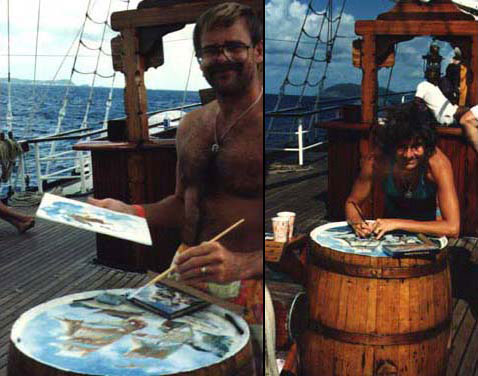 We sort of skittered around the barrel with our brushes and paints, sometimes working at the same time sometimes alternating. The rum barrel was strategically situated next to the bar so all the while passengers and crew were hovering about us as we worked.

When we finished the painting, we signed it giving credit to the original artist whose work we were asked to copy. There was a bung hole cover that got painted as well. Don wore a tee shirt that had art on it of a skull wearing a pirate hat with a parrot that was done by James Gurney (of Dinotopia fame) and the captain wanted that "pinched" too so we credited Jim as well. 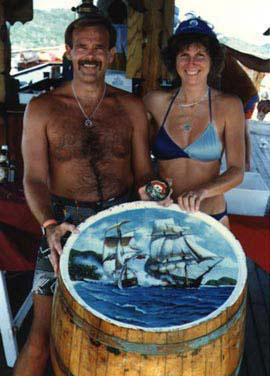