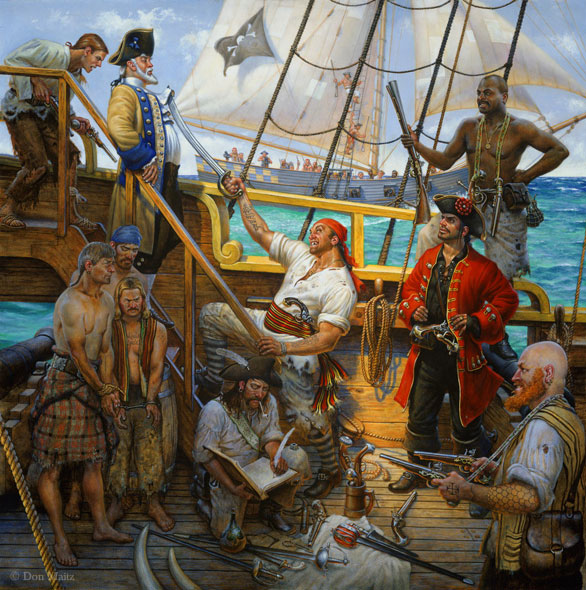 "Taking the Whydah", a 1998 corporate commission for National Geographic Magazine.

While Maitz has produced significant personal works, a great deal of his art has been developed for all sorts of clients. In addition to those mentioned in his bio, he has created works for DragonCon, the World Science Fiction Convention, the World Fantasy Convention, and Lucca Comics and Games in Italy -- all venues commissioning art that have hosted appearances by the artist.

For publishing and institutional clients, the commission begins with a discussion of the scope of the art. After an agreement is reached, I provide preliminary material before beginning the final artwork. These materials are presented, discussed, adjusted and approved during phases of completion. Sometimes "in progress" snapshots are provided if deviations from the approved sketch occur. 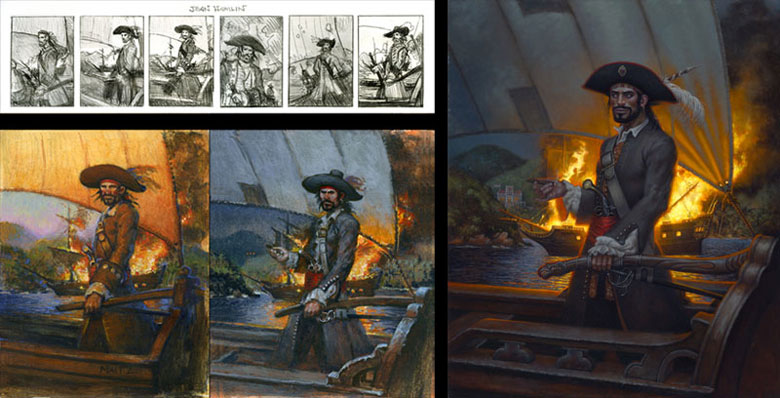 When the art is at completion, I send a snapshot for final confirmation. The approved artwork goes to a professional photography studio for digital capture. In most published commissions, the original artwork remains the property of the artist and selective reproduction rights (agreed to in writing beforehand) are transferred with the sale. Original art commissions where the physical artwork is sold do not include any reproduction rights, except with my expressed written permission.

"Surprise", a private commission in 2016 based on the film, Master and Commander: Far Side of the World. It features a recreation of a helicopter view from the film, painted at sea level from research photography of a sea battle re-enactment.

The artist modeling as the subject of a private commission depicting Long John Silver in the Treasure Cave in 2014.
Remarques 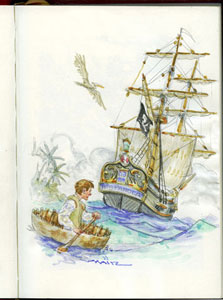 "Voyage of the Coracle", a commissioned remarque in a copy of Robert Louis Stevenson's Treasure Island.

I accept commissions for remarques, where I draw or paint inside books either in pencil, colored pencil, or watercolor. Prices for these range from $125 to $250 depending upon media, size and complexity. The process entails contacting me, discussing the intended remarque, sending me the book, and providing for the return postage. I present an initial pencil concept via email and, upon agreement, produce the remarque and return the book.

Preliminary sketches and watercolor remarques, featuring Bink from Piers Anthony's A Spell for Chameleon (left), Buck in a copy of The Best of Edmond Hamilton (center), and Daenerys from George R.R. Martin's A Game of Thrones.

As book paper stock is not always suitable for water media, some minor rippling of the page can occur. To avoid this, some clients have opted for "Wall Art Remarques" suitable for framing instead of inside a book. These are done on arches watercolor paper with size and price negotiated. Examples of this treatment are three watercolor paintings from Desperation by Stephen King.

For some commissions, the concept is suggested by a client. After agreeing upon price and media, I develop sketches for approval before beginning the final art. Usually half the agreed amount is provided at the beginning of the commission with final payment made at time of final approval. Price does not include shipping costs.

Commissions with client-suggested concepts (left to right): "Pirates Abroad", "Riding the Storm Out", and "Sharing a Book".
Portraits

I also create portrait art in oil or watercolor, often as special gifts for weddings and other special occasions. Portraits require high-quality photos sent by the client. Poor photography sources negate the commission. I discuss subject matter, size, price, and media with the client before beginning. Time for completion varies depending upon my professional schedule.

Contact Don Maitz by email to inquire about new commissions or discuss methods and techniques.

© 1999 - 2021 by Don Maitz. All rights reserved. No permission is granted to use any content from this website for other purposes without the express written consent of Don Maitz. Kindly respect my copyrights and do not download images. Report website problems to Brian Uri.